These digi-scoped photographs of two ad. glaucous gulls Larus hyperboreus were taken in Swanage Dorset on 22nd February 2009. I thought they deserved another outing, having been previously published on the author's Flickr photostream. 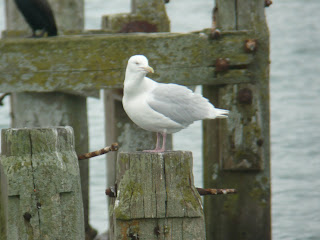 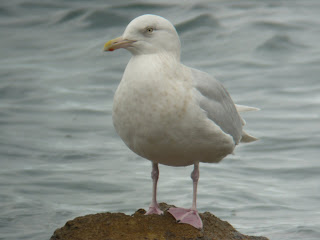 Posted by part-time Naturalist at 18:06 No comments:

At Noar Hill I learnt how to fell small trees with hand tools, under the instruction of the Hampshire Conservation Volunteer [HCV] Trainer, David Hurst. 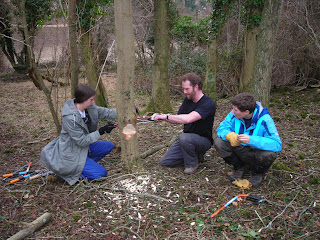 picture courtesy Mark Dakin [HCV]
Whilst we concentrated on cutting back Ash (Fraxinus excelsior)  and holly (Ilex sp.) with hand-tools, chain-saws dealt with the much larger beech (Fagus sylvatica). The felling took place as part of the Hampshire and IOW Wildlife Trust management plan, to clear secondary woodland and expand the chalkdown grassland on site.
Despite excellent health and safety instruction the day was only slightly marred by a freak handsaw accident. 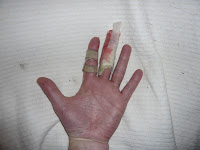 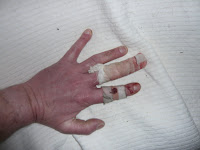 1 x red kite (Milvus milvus) was the birding highlight of the day.
Posted by part-time Naturalist at 23:17 No comments:

Added great tit Parus major and coal tit Parus ater to the official (combined) garden list this morning, although both have previously been recorded as flyovers.
Posted by part-time Naturalist at 18:45 No comments:

Late decision made this morning to bird between the rainfall, so headed to Titchfield Haven to make use of the hides .. water levels still very high on the scrapes. The usual winter wildfowl and waders present and the golden plover Pluvialis apricia flock remains on site numbering circa 170 birds. Snipe Gallinago gallinago although in small numbers seemed exceptionally visible today and several were seen in flight between scrape shore and islands.
Brownwich Cliffs added a new bird to my lifelist in the form of 3 x velvet scoter Melanitta fusca a trio have been reported regularly in the stretch between Hill Head and Chilling since 27th January 10 although winter 09/10 reports of individual birds being seen in that area date from the start of December 09. This is the second scoter sp. I have seen this year having picked up on a single common scoter Melanitta nigra on the LTC count Farlington Marshes in early January.
Also present on the sea were 3 x great northern diver Gavia immer; 15 x great crested grebe Podiceps cristatus; and 2 x red breasted merganser Mergus serrator.
Hook with Warsash was a complete wash out adding insult to injury when I returned home and checked the going birding website http://www.goingbirding.co.uk/hants/ to see I had dipped on two firecrest Regulus ignicapillus and a bittern Botaurus stellaris all three of whom were seen late in the day about 25m away from where my car was parked.
Posted by part-time Naturalist at 18:36 No comments:

New Forest Birding Off - back to the Garden then !

With the weather forecast so grim, the planned NF birding trip for today was cancelled last night before anyone had to set their alarms for stupid o'clock. This morning I resorted to a quick garden bird watch instead.
My neighbours garden still continues to hold the birds longer than mine at the moment - down to both the meal worms and fat ball on offer, against my seed mixes and peanuts (the latter appearing to be completely ignored).
Having woken to the sound of a songthrush Turdus philomelos singing this morning, I was pleased to see one of the regulars in the garden a little later on. A male house sparrow Passer domesticus; blackbird Turdus merula (4 individuals); 2 x blue tit Cyanistes caeruleus;  3 x wood pigeon Columba palumbus and a single robin Erithacus rubecula all present over the brief watch.
A single magpie Pica pica first noted 14.02.10 was again seen taking big chunks out of the fat ball before heading over the wall for seed. The magpie is the second bird added to the garden list recently - two herring gull Larus argentatus spent some time on the neighbours kitchen roof at the end of last week taking respite from the aerial combat they were engrossed in overhead as part of a larger group.
Elsewhere Ian reported that he had a blackcap Sylvia atricapilla this morning on the apples in his Surrey garden.
Fair weather birders maybe - but it is dismal outside with only the shortest of breaks between the showers.
Posted by part-time Naturalist at 10:30 No comments:

The theory about a second local songthrush Turdus philomelos was also confirmed when both birds were seen on adjacent garden walls at the same time.
Posted by part-time Naturalist at 21:43 No comments: