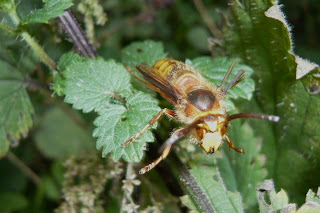 Posted by part-time Naturalist at 23:02 No comments: 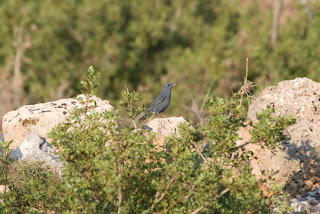 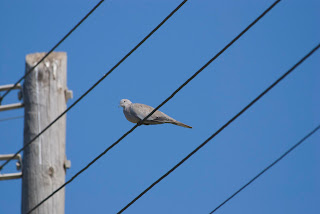 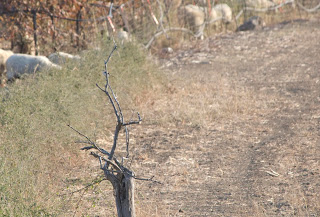 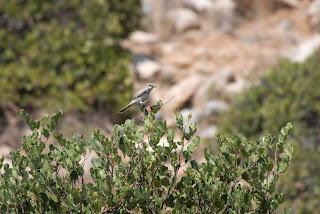 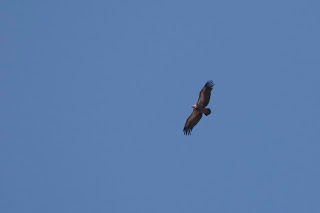 Posted by part-time Naturalist at 20:00 No comments:

A very small selection of Cretan reptiles and amphibians 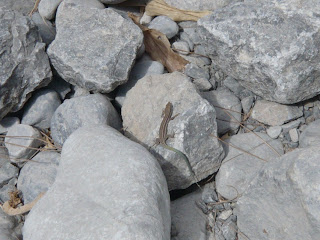 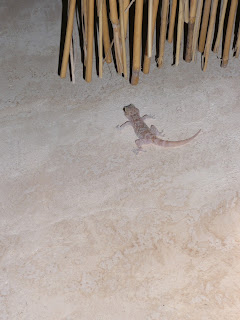 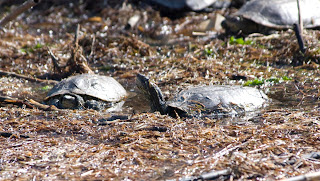 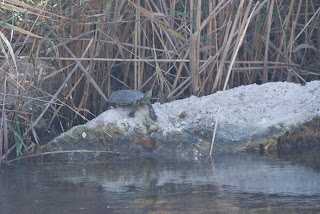 Incidental records amounting to only three species out of a possible list of 16 reptiles and amphibians which inhabit Crete.
Posted by part-time Naturalist at 23:59 No comments: 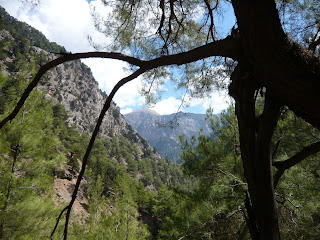 Samaria Gorge is situated in the White Mountains of western Crete. The gorge has been designated a National Park since 1962 and a UNESCO Biosphere Reserve since 1981.
The gorge lies in a mountainous limestone area holding 16 habitats listed in the European Habitats Directive 1992, of which 7 are priority (Spanos I. Platis P. Meliadis I. Tsiontis A., 2008). It runs for 13km (+ additional 2km) dropping from the Omalos Plateau at a height of 1250m and reaching the Libyan Sea at Agia Roumeli on the southern coast of Crete. 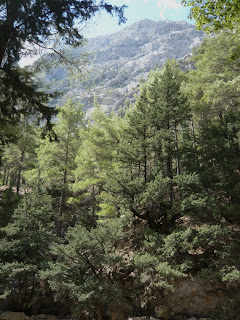 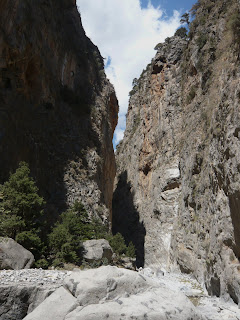 blue rock thrush (Monticola solitarius)
Samaria Gorge has the largest wild stand of mediterranean cyprus (Cupressus sempervirens) in Europe and increasingly turkish pine (Pinus brutia) which poses a fire risk to the former due to its prolific combustability. The threat of fire is very real in the high summer temperatues and potentially due to careless tourist activity.
The historic landscape holds evidence of 6000yrs of human habitation (Rackam O. 2008). The last of its residents - apparently two elderly women (anecdotally) - were moved out of the gorge by the Greek government when it became a National Park in 1962.
Samaria Gorge was designated as a National Park for the protection of the endemic Cretan wild goat or Kri kri (Capra aegagrus cretica) known locally as "Agrimi". It is also home to 15 other mammals, 69 birds and 500 species of tree, shrub and herbs (Spanos I. Platis P. Meliadis I. Tsiontis A., 2008). 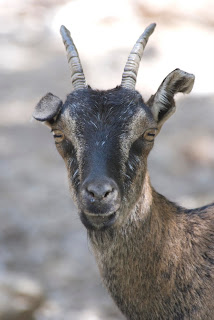 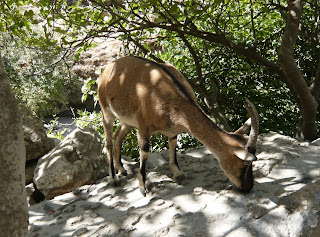 Capra aegagrus cretica
A major tourist attraction and hill-walkers destination, the gorge is managed by limited seasonal access, and strict controls on tourist activity within the boundaries (no camping, fires, access other than marked pathway, warden controlled). Access currently costs €5 and ticket numbers are monitored to ensure that all walkers have passed through on a daily basis.
References


Spanos I. Platis P. Meliadis I. Tsiontis A., 2008. A review on the ecology and management of the Samaria Gorge, a Greek biosphere reserve. Journal of Geography and Regional Planning Vol. 1(2), April, 2008). [Online] Available at:
http://www.academicjournals.org/JGRP/PDF/Pdf2008/Apr/Spanos%20et%20al.pdf
Further information 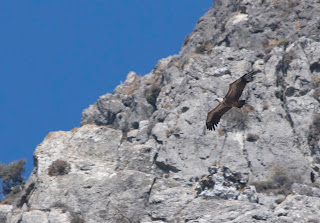 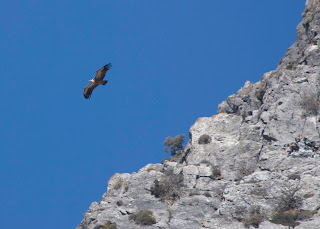 The end of a hard day's scrub-bashing at Stockbridge Down with Hampshire Conservation Volunteers was rewarded with great views of five spotted flycatcher (Muscicapa striata) - a total of eight individual birds had been seen earlier in the day by Dave Hurst and Ed; willow warbler (Phylloscopus trochilus) and chiffchaff (Phylloscopus collybita) provided added interest.
Posted by part-time Naturalist at 18:14 No comments: